Until May at the summit 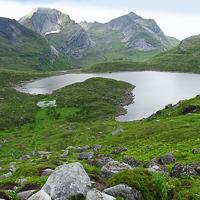 Another summit few people hike, yet it has an impressive view of Horseid beach to the west and over the Selfjord to the east. The summit is located along the itinerary of the big trek across the Lofotens between the Selfjord and the Kjerkfjord and can be climbed as an extension of that leg of the hike. The walk up to it doesn’t have any particular technical difficulty, but it is fairly long and crosses many wet, boggy areas that sometimes make progress difficult. Finally, from the Fagerdålen pass, the itinerary is off trail. Despite these difficulties, in clear weather the last part of this hike gives you a series of magnificent panoramas over the south of the islands.

The trail you’ll follow is pretty large at the start. It leaves from the parking lot and goes west along the bank of the Stomarkpollen a hundred or so yards away. The ground is quite wet and you’ll cross many bodies of water, wider or narrower depending on recent rainfall. A few parallel trails go through this large boggy meadow. But whichever you take, you’ll have a hard time keeping your feet dry. The trail then turns south and goes around the end of the Stormarkpollen fjord in a drier but hillier area and reaches the first body of water, which you cross. Then the trail meets the second body of water (Fageråa) and goes along it for about 200 yards, going up the little valley through a wooded area. Around 100 m (328 ft) of altitude, the trail reaches a boggy open meadow and reaches the first little lake. Next the trail follows the west bank of the big lake of Fageråvatnet through a maze of big rocks and dwarf birches. At the end of the lake, the trail slopes steeply up the little valley of Fagerådalen and reaches a pass between the 492 m point (1,615 ft) and the Markan summit. About 60 yards before reaching the pass, you leave the trail to take a right at the level of the bend at 400 m (1,312 ft). From then on, there’s no trace of a trail. If the weather is clear, you should see the summit of Branntuva in front of you (northwest), preceded by a pass 500 m (1,640 ft) high. Follow the bend at the level of roughly 430 m (1,410 ft) until you get below the pass, then climb the slope to get to it. From the pass, you have the best view of Horseid beach down below to the northwest. From there, climb up the south ridge of Branntuva, which is extremely rounded, avoiding the screes. Toward 680 m (2,231 ft), the slope becomes gentler and you find yourself on a grassy plateau. The cairn of Branntuva stands at the top of this plateau (702 m / 2,303 ft). From the summit, you have an impressive view of the jagged relief of the south of the island. Go back the same way.

No
Slideshow
View the embedded image gallery online at:
https://rando-lofoten.net/en/hiking-to-branntuva?tmpl=component&print=1#sigProIdf28c858b41 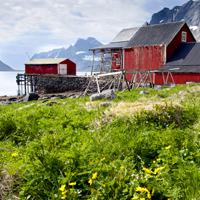 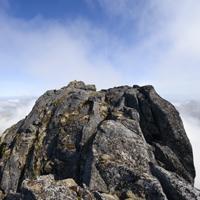 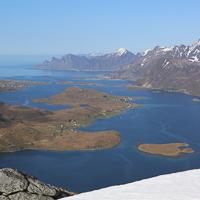 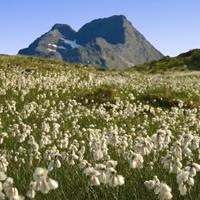