Hiking to Sundklakktinden and Skjolden 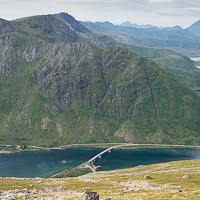 This rarely visited peak is located at the southern tip of the little island of Gimsøya. The absence of a trail, the rich vegetation and the steepness of the slope make it complicated to reach the summit, but the view really deserves a little effort.

Coming from Leknes, go about thirty meters (yards) further than the Jørndalen farm (so as to avoid bothering the people who live there by encroaching on their property) and cross the ditch to the left of the road. Make your way to the edge of the woods to go around the farm by the right and walk to the stream flowing at the bottom of the valley of Jørndalen.

You’ll find a vague path that goes a few hundred yards along the stream. It then disappears into a steeper slope, covered with dwarf plants. In this part of the ascent, there isn’t really a trail and you’ll have to make your way by avoiding areas where the plants are too thick and the passages too steep—until you reach the altitude of roughly 250 m (820 ft).

Around this altitude, roughly at the spot where the markings of the stream disappear from the 1: 50,000 map, the little valley grows wider and the slopes less steep, replaced by a sort of cirque whose central part reaches a pass. Again you’ll find vague paths made by passing sheep. Follow these paths toward the pass between the summits of Sundklakktinden and Svarttinden.

Once you're at the pass, take a left and follow the east ridge of Sundklakktinden on an easily visible trail. It is possible to climb directly up to the summit or—this is what the line marked here shows—you can walk to the southern part of the mountain to have a lovely view, looking down over the straits and the village of Henningsvær.

Once you’ve reached the summit of Sundklakktinden, it’s easy to reach the summit of Skjolden to the north. It’s about sixty-five feet higher and gives you a unique panorama over Gimsøya Island and the northern coast of the archipelago.
Back the same way.

No
Slideshow
View the embedded image gallery online at:
https://rando-lofoten.net/en/hiking-to-sundklakktinden#sigProId188a3399db 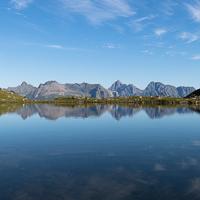 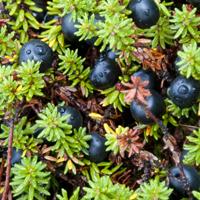 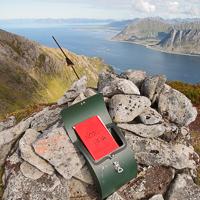 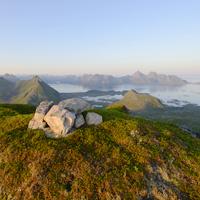