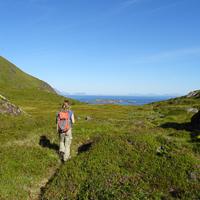 This short hike, which is accessible to everyone, explores a little-known part of the island of Vestvågøya thirty minutes or so to the south of Leknes. The starting point is the hamlet of Ure which boasts a few fine wooden houses from the late 19th century that belonged to rich fishing families. The port is surrounded by many small islands that protect it from the sometimes rough waters of Vestfjord. Behind the hamlet is a small plateau set between two mountains, it opens to the east and to the west over the fjord. Attractive Lake Urevatnet overlooks the plateau.

In the village take the first path on the right (GPS N68° 05.727' E13° 43.508') and climb it virtually to the end (GPS N68° 05.623' E13° 43.416') where you take the trail there heading south/south-west. The trail climbs quickly up to the plateau (around 50m altitude) and continues on the south side of the plateau between the foot of the mountain of Ureberget and a huge swamp zone marked on the map (Myran) and reaches the small pass of Fallet. From the pass take the right-hand trail that climbs north-west towards Lake Urevatnet.

Roughly 200m before you reach the lake, on your left you will see a sheep trail that follows the Åmundtinden ridge and which, after some considerable exertion, takes you to the summit of Breidtinden on your right and Middagstinden on your left. Caution: If you opt for this route remember that the level of difficulty is not the same. Near the lake you will come across a recent building of large raised stones (housing a boat). From this point take the small trail towards your right (east), again you will walk past a tiny lake (which is not marked on the map) before reaching the highest point of the hike in Rabban (120m) from where there is a fine view over the fjord and the hamlet below. The trail goes back down near abandoned farming land and the foundations of a farm. Then, once you have gone through a sheep fence, you go back down on an old stone road and take a trail on the left that leads to the hamlet of Ure (GPS - N68° 05.685' E13° 43.403').

Urvatnet is a nice ramble that is possible virtually all year round. 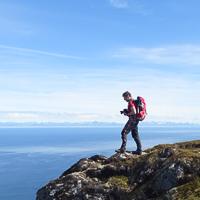 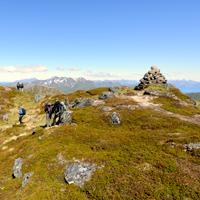 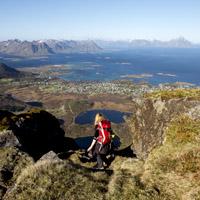 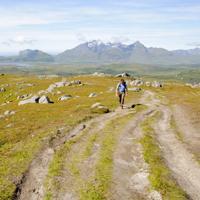