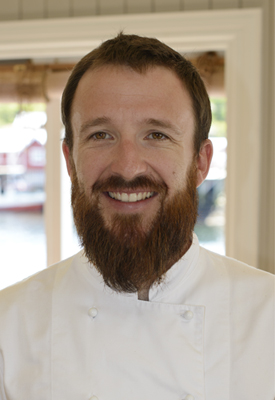 Jean-Baptiste is a Frenchman from Rouen in Normandy who arrived in Norway four years ago after following his girlfriend to Oslo. Even though the love story ended there, he decided to stay and take the first job he was offered. He graduated from the faculty of sport and after working as a lifeguard in France, he found work in a completely different field. After a trial period of only one week, he was offered a job in a restaurant in Paris. He got on so well that after three months he became the chef. He now works as a cook in another restaurant, Maren Anna in Sørvågen in the south of the Lofoten Islands, where he has learned to cook the traditional dishes of the islands (halibut, whale stew, dried cod, etc.). He now speaks Norwegian and is a keen hiker.

Rando-Lofoten: How did you end up here in the Lofoten Islands?

Jean-Baptiste: After working in Oslo for about ten months I was no longer very interested in what I was doing and needed a change of scenery. I thought I could give it a go in the Lofoten Islands which I had already visited ten years earlier on a hiking holiday.

I made contact with the inhabitants of the archipelago through social networks and it was on the Couchsurfing site that I met Anette, one of the Maren Anna bosses. This will be my third season  working in the Lofoten Islands and I also spent much of the winter here. I spend November and December in France to see my family and celebrate Christmas.

J-B: I mainly came back to the Lofoten Islands because I really liked the landscapes the first time I came, the mixture of sea and mountains. I love the sea and the fact of combining the two is just great. The reason I have stayed here is mainly the extraordinary landscapes of the Lofoten Islands and also because I have met someone special here. The cool climate in summer suits me down to the ground!

RL: Was it easy to fit in in the Lofoten Islands?

J-B: It takes time, and despite the fact that most Norwegians speak perfect English, it’s not always easy to make friends in Norwegian groups if you don’t speak the language. When you got out it’s OK when everyone’s had a drink, but the day after it’s no longer the case, particularly in Oslo which is nevertheless a large city, it’s quite impersonal. In the Lofoten Islands things were different when I arrived. The people in the archipelago live mainly through tourism and the group I’m in here, who are friends I work with, is very international. There are people from Mexico, Poland, France, Norway, Italy… and I live within that circle of friends. We also meet up outside work when the season is over in winter, when we’re not too busy. There are not that many locals in my circle of friends because most of the inhabitants of Sørvågen are 60 or over. In summer on the other hand there is a much younger crowd. The age difference comes from the fact that there’s not much work all year round for young people. In summer there is the tourism and in winter there are not many alternatives to working in the fish industry.

RL: What do you do with your free time in the Lofoten Islands?

J-B: On my days off I head for the mountains and go to the topps (peaks in Norwegian) and there are lots around here. I have already climbed a lot around the island of Moskenesøya and now the only ones left are those where access is very difficult. I’ve got quite a few projects that need two people, with a team mate you can rope yourself to, such as Hustinden near Reine. Last year I walked from A i Lofoten to Hellsega, a great 12-hour hike and camped on the summit of the magnificent plateau overlooking Moskenstrom, on the southernmost point of Moskenesøya. And in winter from January onwards I combine ski mountaineering, cross-country skiing and surfing. Last winter we had great fun, there was lots of snow, we went up with seal skins and blades that you put on the skis. And when there are big waves I go to Unstad or Kvalvika to surf on the Norwegian Sea.